Dogtag was founded by people who are no strangers to the rigours and challenges of skiing in remote places so it should be no surprise that we choose to cover these kinds of activity. So how do we define ski mountaineering as opposed to any other form of ‘off-pist’ skiing?

Ski Mountaineering is a sport that combines the techniques of skiing (often ski touring) with those of mountaineering. The goal of ski mountaineering is to climb a mountain by a worthy route and then ski the mountain down an elegant line, preferably from the summit. The skills involve the ability to ski steep, untracked and ungroomed slopes

While using skiing techniques for much of the time, ski mountaineers climb otherwise inaccessible or dangerous slopes on foot using a range of mountaineering equipment - typically crampons, ice axes and ropes - while skis are carried strapped to their backpack. This either permits access to extreme slopes, or more often allows transit through otherwise impassable terrain in order to continue beyond on skis, where normal ski touring equipment such as skins and ski crampons are used. 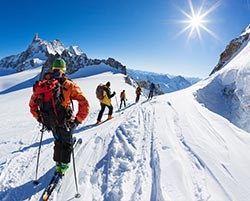 What's the difference between Ski Mountaineering and Ski Touring?

Well, not a lot really. In some definitions, ski touring has more to do with skinning up mountains than with climbing them as the expression 'Ski mountaineering' would imply. However, regardless of which term you choose, both activities involve climbing and crossing mountains in order to ski them. Both activities take place off the beaten track, usually a considerable distance form the resort. So insurers consider the risks to be the same regardless of which expression you use. Both are rated as Dogtag Extreme and if you want cover for this sort of activity then Extreme is what you should choose for your sport level when you go for a quote.

If you chose the Extreme level of cover for say, Ski Mountaineering, it will automatically cover you for lower Sport and Sport+grades of skiing too as well as a host of other sports. If you want to know which category each sport falls into just check the Sports List.

While we're on the subject, Ski Mountaineering shouldn't be confused with Off Piste Skiing which has it's own definition and is categorised as Dogtag Sport as far as insurance risk is concerned

By the way, we're conscious that most ski mountaineering is done in the Alps and the Pyrenees but if you're taking out an Annual Multi-Trip policy you might want to think about Worldwide cover rather than simply a cover for Europe; we occasionally get emails from customers wanting to upgrade to Worldwide from Europe cover - they forgot about their summer sun holiday! Just a thought.