All new sales have been temporarily suspended

Which countries can I get Travel Insurance for?

Which countries do I need Travel Insurance for?

Which countries can I get Travel Insurance for?

With our identity-based travel insurance system, DOGTAG 100% Proof Travel Insurance is pretty unique amongst travel insurers in that we can provide travel insurance cover for just about every activity you can think of and just about every part of the globe too. However, there are some areas of the globe where it's just not safe or sensible to go - and we're not talking simply about chasing your sport on the tops of mountians, down white-water cataracts or trekking the frozen wastes of Antarctica. No, the areas that we can't cover are the ones where the main danger comes from other people. You can probably think of a few off the top of your head but they'll include the likes of war zones, areas where kidnapping or terrorism, or both are common. Nasty places. 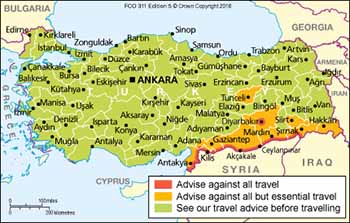 So where's the list of places we can't provide cover for? Well, we take our lead from the current (at the time you make the purchase) FCO Travel Advice tables. Every country you can think of is listed there and its the FCO travel advice that we stick by. If the FCO states that they...
• Advise against all travel, or
• Advise against all but essential travel
... then we can't cover it.

How does it work?

Let's take a look at a couple of examples. First of Turkey. Turkey is commonly understood to be a popular holiday destination. However, eastern Turkey is pretty-well bandit country with the TKK active there, and the closer you get to the Syrian or Iraqi border the more dangerous it gets. As you can see on the FCO illustration here, they advise against going there. 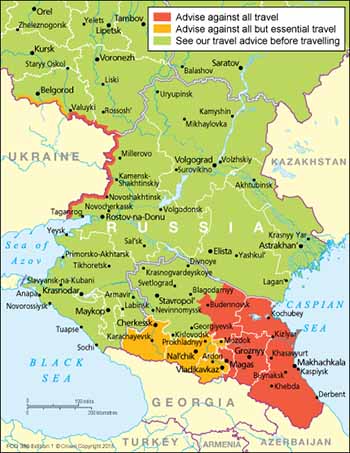 Let's look at another, less popular area but one which we get enquiries about from mountaineers: Russia. You'll see from our own list of countries below, that we list Russia like this: "Russia (European)" and that's because terrorist activity in the areas butting up against Georgia and Azerbaijan is pretty rife with gangster kidnappings and Islamic activity common. And as we go to press, the border with Ukraine isn't all that safe either.

OK, so what are the rules?

If you're in any doubt about your destination and whether we can cover your trip there, have a look at the FCO Travel Advice website. If your intended destination is in either of these zones:
• Red:- Advise against all travel, or
• Orange:- Advise against all but essential travel
then we don't cover it. And even if your destination is in the green zone, but nevertheless close to a red or orange zone then it's still best to check in with the FCO Travel Advice site  for an update

So which countries can I get Travel Insurance for - assuming there's nothing dodgy about it?

Well, as we said above, just about anywhere on the globe.

With our Annual Multi-trip we've simply divided the globe into two cover zones:
• Europe
• Worldwide (including the USA & Canada)

Which countries are in which zone?

If your geography's not that good, just check this table:

Where are you travelling to?

Where there is a cost saving to be made, some of our products offer variations on cover outside Europe:

Worldwide (Including USA & Canada) means: All countries worldwide including the United States and Canada. (available with all Dogtag products)

Where are you travelling to?

Where there is a cost saving to be made, some of our products offer variations on cover outside Europe:

Worldwide (Including USA & Canada) means: All countries worldwide including the United States and Canada. (available with all Dogtag products)