What's the difference between 'Recreational', 'Downhill' and 'Competitive'?
Well, as we said above, we think there are two main types of mountain biking and you can compete in both. Let's take a look:

Firstly, there are people who enjoy forest and mountain trails - getting the bike off the roof of the car and just going. We define this sort of thing as "recreational mountain biking" even though it can, of course, be fairly adventurous. You'll be tackling a variety of terrain, climbing and descending. For general recreational mountain biking holiday insurance, you'll need Dogtag Sport, our default sport cover level, no extra charge. 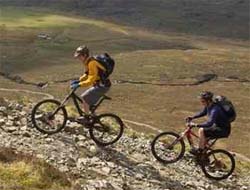 Duuurrrh? - I sometimes go downhill :-/
Now, before we go on, we realise that cross-country, "recreational" mountain bikers go down hills - usually ones that they've just cycled up but that's not what we're talking about here.

We would define "downhill mountain biking" as going to the top of a hill or mountain with the specific intention of riding a marked or unmarked downhill trail. It's commonly done using full protective clothing and although we can't enforce that, remember, as with car seat belts, if you knowingly or unnecessarily compromise your safety then you could compromise your insurance cover.

The usual way to get to the top for downhill mountain biking is by using the local uplift (usually ski lifts) but we're not necessariiy talking about how you get to the top, it's that the purpose of your trip is to cycle downhill on rough and challenging terrain on a trail that's designed for the purpose - one where you wouldn't dare go up simply because you'll meet other folk coming down.

As we said above, for Downhill Mountain Biking travvel cover, you need to choose Dogtag Extreme as your sport cover level.

The competitive element in any sport changes things. When we compete at sport, to a very large extent, the gloves come off and the red mist comes down. Our competitive urges will even drive us to go as close to or over the edge of our experience or ability, a zone where judgement and caution run at reduced levels and this is where the additional risk comes in. Making mistakes and crashing is bad enough when you're cycling recreationally but the competitive element will mean that you'll probably be going much faster and closer to the edge and not only that, you'll be in the company of other competitors who are equally determined.

To be properly covered with your competitive downhill mountain biking travel insurance then you need to be sure to choose Dogtag Extreme+ as you sport cover level. Note the + there, it's Extreme+, not Extreme.

If you're going on holiday to do general mountain biking of the 'recreational' type we've defined above then Dogtag SPORT will cover you for that. We're thinking about general cross country, forest trails, up hill and down date, so to speak

Plainly, when we compete at anything, the 'gloves come off' and we get altogether more sportive, as the French say, and things tend to get a bit edgier. This is why Competitive Mountain biking is rated as Extreme+. The reasons for this should be pretty obvious - it's not a sissy sport.

Remember, it's your responsibility to ensure that you pick the right sport cover level for your sport.

Both
Ok, so you don't know whether you'll try downhill mountain biking or not. Or perhaps you only intend to do a bit but the main purpose of the holiday is recreational mountain biking. Well, there's the rub. If you have Dogtag Sport or Sport+ then you are not insured for downhill mountain biking as we've defined it above - at all. The best plan, always, whatever the sport, if you think you might do downhill (and 'might' with our type of customers usually means 'will') then make sure you get the right cover.

Finally, to reiterate - anything competitive but not specifically Downhill
Any competitive mountain biking event such as the Yak Attack, a rally or a race is classed as Extreme+. We're not bothered about the altitude or whether it's at sea level, it's just that competitive events carry a far higher risk. Racing across terrain isn't as risky as Downhill racing but we still rate the likes of Yak Attack or Rumble In the Jungle as Extreme+.

Includes a huge list of sports and recreational pursuits (unlike most other insurers): wintersports (including off-piste), most watersports, mountain biking, adventure travel. Or it’s perfect for just chilling out on the beach!

Adds cover for the most extreme sports such as Ultra marathon like the MdS, Mountaineering over 4,000 meters and other crazy stuff.